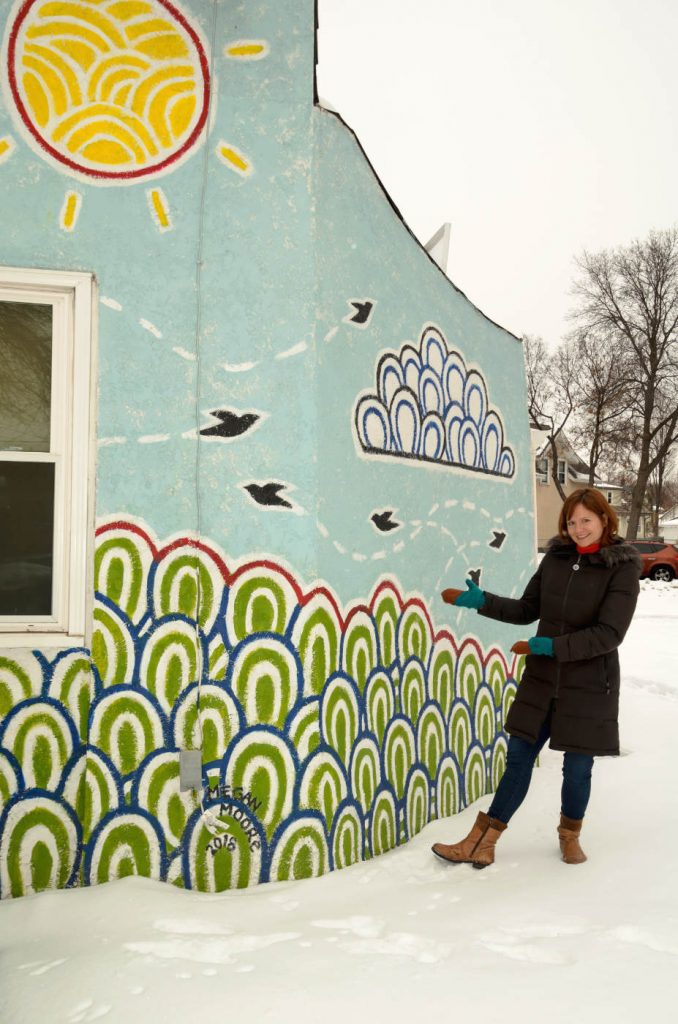 LoLa artist Megan Moore created a mural on the side and the back of the Minnehaha Scoop. Here’s Megan’s back story on the mural:

“James V. Freid and his wife Karen own Big Bell Ice Cream, Inc and The Minnehaha Scoop. They came to the LoLa Fine Art Exhibition reception in 2018 looking for neighborhood artists that might be interested in doing a mural on their new business, The Minnehaha Scoop. They wanted the plain white square to be transformed into a local work of art and planned to feature multiple artists. They connected with me at the reception, and found another local artist, Forrest Wozinak who worked with an artistic partner to do the other half of the building. James and Karen were completely open to subject matter and execution for the mural. They mentioned to consider their logo colors (primary red, yellow and blue) and that even something abstract, like swirls, could be cool. I took that idea and developed it into a landscape featuring looping hills, clouds, and birds in flight. The execution is more simplified than some of the smaller oil paintings I do, but it reads well from a distance and adds a summer scene to the neighborhood, year round.”

The League of Longfellow Artists (LoLa) is a local nonprofit group that organizes the annual LoLa Art Crawl, the Biggest Little Neighborhood Art Crawl in Minneapolis, along with other events.